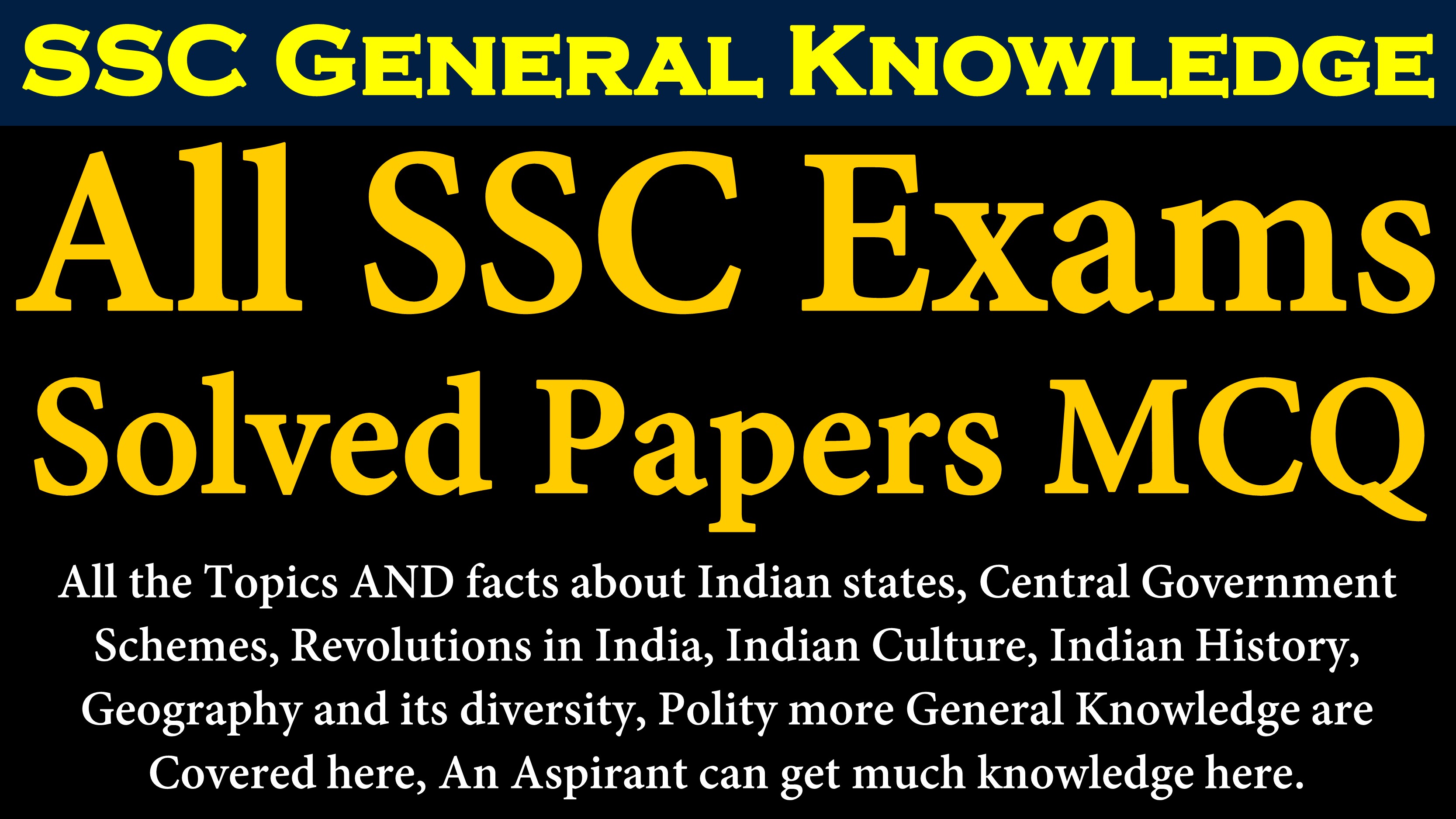 SSC GENERAL Knowledge Questions: In this section you will be able to get most Important Question of General Knowledge for SSC Examination. General Knowledge is the only Section of the Examination syllabus which is asked in SSC Exams & all the other Examinations. All the Topics o finsight facts about Indian states, Central Government Schemes, Revolutions in India, Indian Culture, Indian History, Geography and its diversity, Polity more General Knowledge are Covered here, An Aspirant can get much knowledge here.

1. The home of Gargi, Maitrey, and Kapila was at

Notes: The name ‘Mithila‘ goes back to Puranic times. It occurs in the Mahabharata and in Pali literature. According to the Puranic tradition the name has been derived from that of Mithi (son of Nimi) King of Ayodhya and grandson of Manu who founded a kingdom which was called Mithila after him. It is associated with Valmiki, Ashtavakra, Yajnavalkya, Udayana, Mahavira, Kanada, Jaimini and Kapila as well as the women philosophers, such as, Gargi, Maitreyi, Bharati and Katyayani. After the era of the Ramayana it is said that the three seats of culture in Vedic period – Kosala, Kasi and Videha – merged to form the Vajjians confederacy and the centre of political gravity shifted from Mithila to Vaishali.

Q.2. Which among the following chronology is correct regarding four ‘samvatas’ ?

Notes: Samvat is any of the various Hindu calendars. In India, there are several calendars in use. The Saka Samvat is associated with 78 A.D; Gupta Samvat with 320 A.D; and Hijri Samvat with 622 A.D. The first year of Hijri era was the Islamic year beginning in AD 622 during which the emigration of Muhammad from Mecca to Medina, known as the Hijra, occurred. The Gregorian calendar, also called the Western calendar and the Christian calendar, is the internationally accepted civil calendar. It was introduced by Pope Gregory XIII, after whom the calendar was named, by a decree signed on 24 February, 1582.

Q.3. Which area of India was known as Avantika in ancient times ?

Notes: Ujjain (Avanti, Avantikapuri), is an ancient city of Malwa region in central India, on the eastern bank of the Kshipra River, today part of the state of Madhya Pradesh. Avanti with its capital at Ujjaini, is mentioned in Buddhist literature as one of the four great powers along with Vatsa, Kosala and Magadha.

Q.4. The Social System of the Harappans was :

Notes: The archaeological record of the Indus civilization provides practically no evidence of armies, kings, slaves, social conflict, prisons, and other oft-negative traits that we traditionally associated with early civilizations. If there were neither slaves nor kings, a more egalitarian system of governance may have been practiced. Besides, compared to other ancient civilizations the houses were of nearly equal size indicating a more egalitarian social structure i.e. The Social System of the Harappans was fairly egalitarian.

Q.5. Which of the following Vedas provides information about the civilisation of the Early Vedic Age?

Notes: The Vedic period (or Vedic age) was a period in history during which the Vedas, the oldest scriptures of Hinduism, were composed. The time span of the period is uncertain. Philological and linguistic evidence indicates that the Rig Veda, the oldest of the Vedas, was composed roughly between 1700 and 1100 BCE, also referred to as the early Vedic period. It is an important source of information on the Vedic religion and their Gods as well as presents a detailed account of the life of the people at that time.

Q.6. The university which became famous in the post-Gupta Era was :

Notes: Nalanda was an ancient centre of higher learning in Bihar, which was a Buddhist centre of learning from the fifth or sixth century A.D. to 1197 CE. Nalanda flourished between the reign of the Sakraditya (whose identity is uncertain and who might have been either Kumara Gupta I or Kumara Gupta II) and 1197 A.D, supported by patronage from the Hindu Gupta rulers as well as Buddhist emperors like Harsha and later emperors from the Pala Empire.

Q.7. Banabhatta was the court poet of which emperor ?

Notes: Banabhatta was a Sanskrit scholar and poet of India. He was the Asthana Kavi in the court of King Harshavardhana, who reigned in the years 606–647 CE in north India. Bana’s principal works include a biography of Harsha, the Harshacharita and one of the world’s earliest novels, Kadambari. The other works attributed to him is the Parvatiparinaya.

Q.8. The first Indian ruler, who established the supremacy of Indian Navy in the Arabian Sea was :

Notes: Rajaraja Chola I created a powerful standing army and a considerable navy, which achieved even greater success under his son Rajendra Chola I. One of the last conquests of Rajaraja was the naval conquest of the ‘old islands of the sea numbering 12,000’, the Maldives. Chola Navy also had played a major role in the invasion of Lanka.

Q.9. Which statement on the Harappan Civilisation is correct?

(a) Horse sacrifice was known to them.
(b) Cow was sacred to them.
(c) ‘Pashupati’ was venerated by them.
(d) The culture was not generally static.

Notes: Potteries of the Harappan Civilization bring out the gradual evolutionary trend in the culture. It is on the basis of different types of potteries and ceramic art from found over the different stages of the civilization, it can be said that Harappan culture was not static and did not disappear suddenly. While showing signs of decay, in course of time it rejuvenated itself by reviving some of the earlier ceramic traditions and evolving new ones in the transitional phase.

Q.10. The First Tirthankara of the Jains was :

Notes: In Jainism, Rishabh was the first of the 24 Tirthankaras who founded the Ikshavaku dynasty and was the first Tirthankara of the present age. Because of this, he was called Adinath. He is mentioned in the Hindu text of the Bhagavata Purana as an avatar of Vishnu. In Jainism, a Tirthankara is a human being who helps in achieving liberation and enlightenment as an “Arihant” by destroying all of their soul constraining (ghati) karmas, became a role-model and leader for those seeking spiritual guidance.