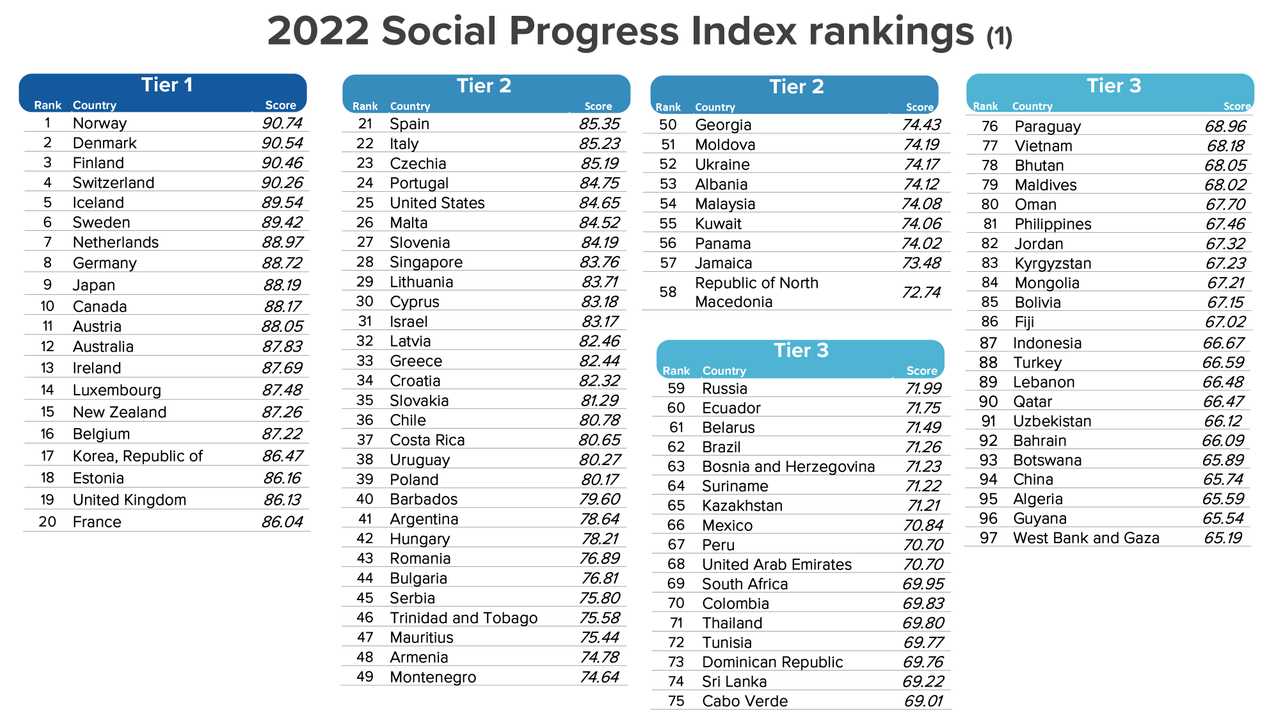 The Institute of Competitiveness released the annual 2022 Social Progress Index (SPI), which was published bySocial Progress Imperative. India secured the 110th global rank among tier 4 countries with a score of 60.19.

The index used 12 components and 60 indicators to measure the social performance of 169 countries fully and an additional 27 countries in part.

What’s in the SPI?

Social Progress Imperative has produced an annual global SPI since 2013. It helps us understand how people around the world are living, who is being left behind and how to accelerate progress.

According to the index, the world has improved but only 0.37 points compared to 2021, while 52 countries (31%) have seen a decline in social progress.

ii.The decline is due to the retreat of individual rights around the world, the impact of COVID-19, the dangers of climate change, economic unrest and widespread political change.

iv.There has been a significant decline in the world score on individual rights (-5.34 points) since 2011.

The SPI for Statesand Districts created by the Institute for Competitiveness and Social Progress Imperative 2022 was submitted to the Economic Advisory Council-Prime Minister (EAC-PM).

About the 2022 SPI for states and districts:

It is a tool to measure the country’s social progress on national and sub-national tiers. It assessed 36 states/UTs and 707 districts. The framework includes 89 indicators at the state level and 49 at the district level.

BasicHuman Needs: It assesses the performance of states and districts in terms of nutrition and basic medical care, water and sanitation, personal safety and shelter.

ii.Foundations of well-being: It evaluates the progress made by the country in the components of access to basic knowledge, access to information and communication, health and well-being and environmental quality.

iii.Opportunity: It focuses on individual rights, individual freedom and choice, inclusivity and access to advanced education.

Ranking of states and districts of India

Based on the SPI score, states and districts are ranked under 6 tiers of social progress, which is shown in the following table:

Puducherry got the highest SPI score of 65.99 due to remarkable performance in components such as personal freedom and choice, shelter and water and sanitation.